During World War II, this section was a strategic defense highway and designated as US 66. The roadway was constructed in 1926 and improved in 1945, due to the damage caused by heavy munitions trucks. From 1926 to 1970, the roadway was an important transportation link between Will County and US 66, which was the primary road between Chicago and California. US 66 created an easy link to this highway which enabled goods from the region to be distributed westward.

This highway also enabled the transportation of munitions from the Joliet Army Ammunition Plant during wartime. The Joliet Army Ammunition Plant was originally known as the Elwood Ordnance Plant and the Kankakee Ordnance Works when they were authorized by the federal government in 1940. At peak production during World War II, over 10,425 people were employed at the two plants creating bombs, shells, mines, detonators, fuses, and boosters. The Elwood and Kankakee Plants were combined and redesignated the Joliet Arsenal in 1945, when operations were placed on standby. The Arsenal was reactivated during the Korean War and again during the Vietnam War. Production stopped in 1976 and by the late 1970s, most operations had ceased. The Joliet Army Ammunition plant was declared inactive in 1993. In 1997, the U.S. Army transferred land to the U.S. Department of Agriculture’s Forest Service. This land is now known as the Midewin National Tallgrass Prairie.

In 1994, IL 53 from Peotone Road to Interstate 80 was designated as Strategic Regional Arterial (SRA). The SRA system is a network of existing roads intended to supplement the existing and proposed expressway facilities by accommodating a significant portion of long-distance, high-volume automobile and commercial vehicle traffic in the region. In February of 1999, the Department completed SRA Study 512. This pre-Phase I study developed a conceptual improvement plan to improve transportation mobility along the corridor, which was made available for local agencies to use in their land use planning activities.

This IL 53 Phase I Study from West Arsenal Road to US 52 was initiated in 2015 to address safety and operations along IL 53.

The IL 53 study area is located in the City of Joliet, the Village of Elwood, and the City of Wilmington, in Will County, Illinois. 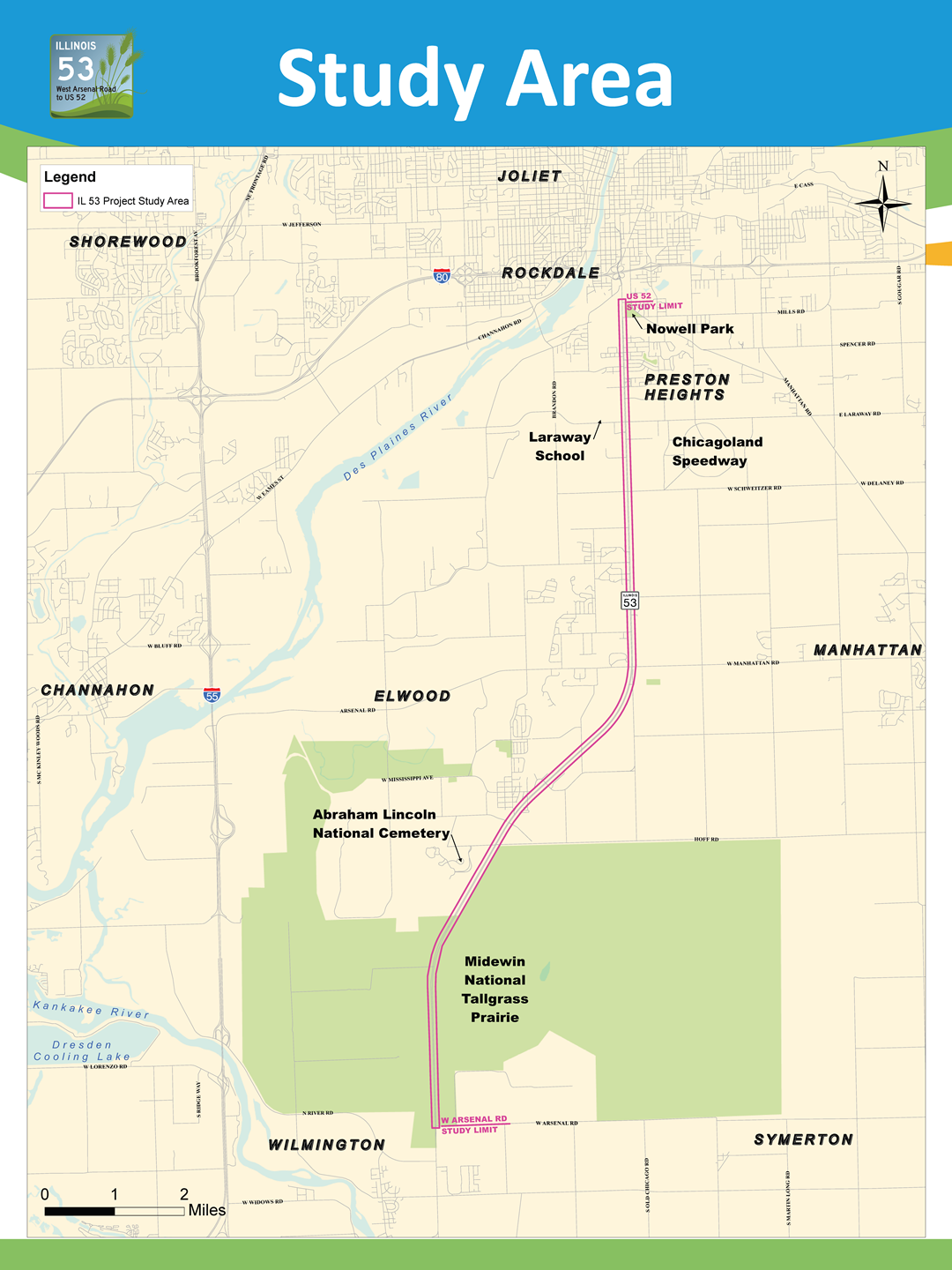